The Participation and Accommodation Committee of the Arbaeen Pilgrimage said that 20 foreign processions declared their readiness to serve the Arbaeen pilgrims on the Shalamcheh borders.

According to media reports, 10 processions from Afghanistan and 10 from Pakistan, Nigeria and India will be stationed on the Shalamcheh border road since September 1, and they will begin serving pilgrims on the 7th of the same month.

The committee added that the location of the international processions in Shalamcheh was determined and the place they needed was provided, explaining that “during the forty days of this year, 1,500 processions will spread in Khuzestan and the paths of the Arbaeen pilgrims to Iraq.”

According to security sources, the Shalamcheh border is the crossing point for foreigners to participate in the Arbaeen Pilgrimage on foot. 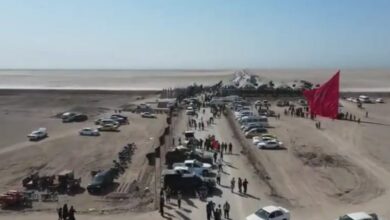 From the Sea to the Sacrifice: Launch of the 40th Arbaeen March Festival from the farthest point in southern Iraq