Misbah Al-Hussein Foundation for Relief and Development in Holy Karbala launched its first awareness and guidance campaigns for pilgrims who will come to participate in the immortal Arbaeen Pilgrimage.

The Foundation said in a statement received by Shia Waves News Agency, “The Foundation’s first awareness and educational campaigns for the Arbaeen pilgrims carried important advice to the Supreme Religious Authority, Grand Ayatollah Sayyed Sadiq Husseini Al-Shirazi, in which he urges the pilgrims to pray for the speedy reappearance of Imam Mahdi (may Allah hasten his reappearance).

It added, “This campaign is being held in cooperation with the Imam Hussein (peace be upon him) Media Group, under the slogan (Imam Hussein Unites Us).”

The statement continued, “The campaign witnessed the distribution of posters for the Husseini processions bearing the advice of the Shirazi Religious Authority, “O Pilgrims and believers, complete your pilgrimage by praying for the reappearance of Imam Mahdi (may Allah hasten his reappearance).”

The Foundation’s statement explained that “this supplication is the greatest thing that the honorable pilgrim brings during the path of love towards the Holy Shrine of Imam Hussein (peace be upon him), where hearts are eager and eyes are looking forward to seeing the Awaited Imam take revenge for his grandfather, the Master of Martyrs (peace be upon him) and spread the banner of divine justice in the world.” 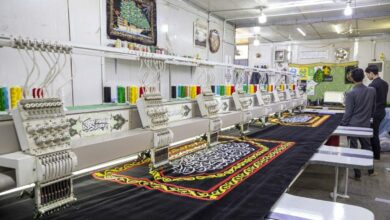 Gifted by the Al-Abbas Holy Shrine, new Kiswa embroidered and stitched for the Al-Askariyain Holy Shrine 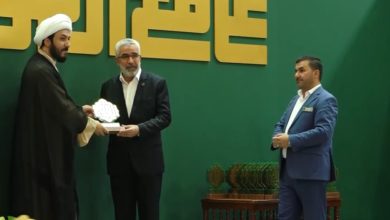 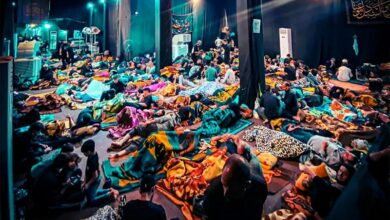