The Pakistani ‘Urdu Point’ news agency reported that several cities in the country, most notably the city of Lahore, are preparing to hold mourning processions on the Arbaeen of Imam Hussein (peace be upon him).

The agency clarified in a report that was followed by Shia Waves News Agency, that “the city of Lahore and several other Pakistani cities will hold processions and mass mourning marches on the Arbaeen anniversary of the grandson of the Noble Prophet (peace be upon him and his family).”

It indicated that “Lahore has developed a plan to hold the mourning ceremonies, as the Lahore Company has been assigned to clean the city ahead of the revival of the occasion.”

The plan aims to provide a safe and healthy environment for pilgrims and participants in the Husseini mourning revival, and camps will also be held to educate participants to maintain their safety.

The agency also reported that “the director of the city’s police, Muhammad Amir, reviewed the arrangements taken to commemorate the mourning of Imam Hussein (peace be upon him), which will be held on September 17.”

Amir affirmed that “the paths of the processions will be fully secured.”

As for the city of Dera Ismail Khan, according to the news agency, “it will also witness the implementation of its plan to revive the Arbaeen, which begins on Saturday and continues until September 19.” 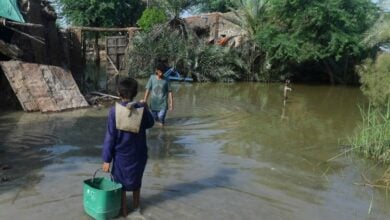 At Least 13 Killed in Bus Blast in Northern Pakistan

Grand Ayatollah Shirazi: Lady Al-Zahra killed after exposing the oppressors through her honorable sermon
5 hours ago