Pakistani media said yesterday, Friday, that the Ministries of Education and Higher Education in the Northwest Province (Khyber Pakhtunkhwa) issued strict instructions to delete false information about the personality and biography of Abu Talib, the father of the Commander of the Faithful (peace be upon them), from the curriculum of Islamic education, and issued a joint statement threatening the abusers.

According to reports followed by Shia Waves News Agency, a number of Shia clerics in the province (Khyber Pakhtunkhwa) demanded the trial of those who dared to describe Abu Talib (peace be upon him) as a polytheist, as part of the Islamic education curriculum for students of the fourth year of secondary school.

Reports added that “several meetings were held by the Ministries of Education and Higher Education in the presence of clerics from the Shia and Sunni sects, and admitted the scandal of this information against the uncle of the Noble Prophet (peace be upon him and his family) and his defender, Abu Talib (peace be upon him).”

The media confirmed that “the Minister of Education, Mahmud Khan, and Minister of Higher Education, Shahram Khan Turkay, vowed to take strict measures against those who deliberately directly offended Abu Talib (peace be upon him) and described him as a non-Muslim in the Islamic education curriculum, and directed their immediate removal.”

An official at the Ministry of Education added that “the Ministry will form a special committee of scholars and university professors to follow up the educational curricula and avoid including false and offensive information against the great Islamic figures.”

Pakistani university punishes students for organizing a conference on Imam Hussein, peace be upon him

Pakistan: Webinar on the history of Husseini elegies and their role in liberating the country from the British occupation 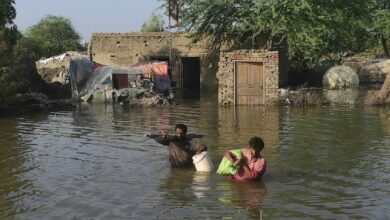